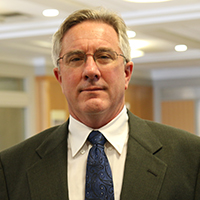 After earning his Ph.D. in Political Science from the University of California, Los Angeles, Dr. Potter taught at Tulane University before coming to TCNJ in 2004. His work on environmental and economic policy has appeared in Latin American Perspectives, the Canadian Journal of Political Science, Energy and Development, Environmental Politics and as chapters in edited volumes.

Brian Potter teaches courses in political economy and international relations, with a focus on Latin America.