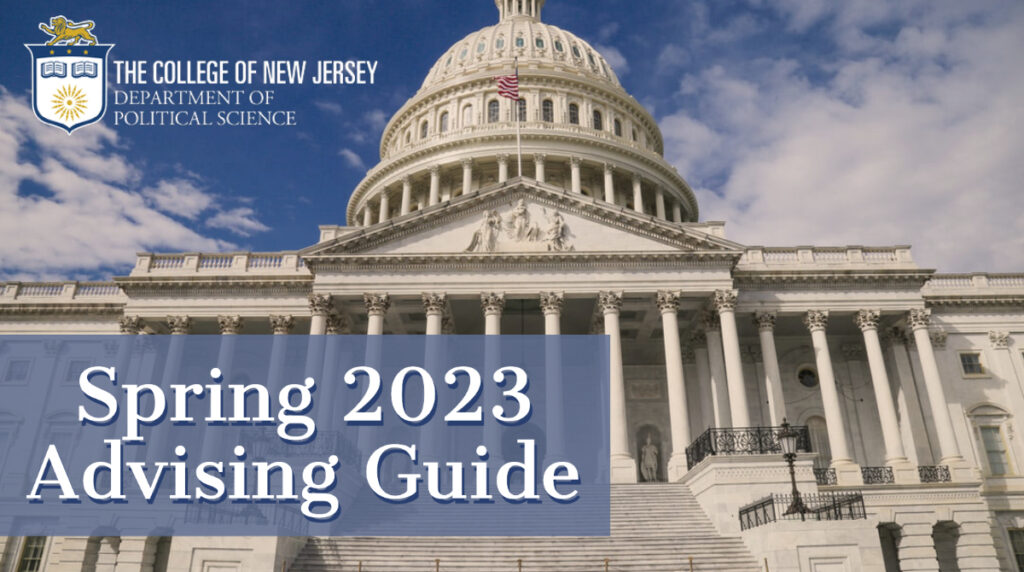 The course list for Spring 2023 is shown below. Classes marked with an asterisk have a topic, which are listed below the course list.

Students with 24 or more completed units and a 3.0 GPA or better can take one (or both) of the courses and count them as elective credit toward their Political Science major or general unit requirement to graduate. Contact Susan Scibilia at scibilis@tcnj.edu to register.

“Politics of the Civil Rights Movement” examines different iterations of civil rights protest in American Politics. Beginning with the Black Freedom Struggle, we will analyze the connective tissue between social movements, exploring how the quest for racial justice has often demanded and inspired activism on other fronts. Students will explore primary texts that speak to the meaning and underlying humanism of resistance politics.

Students in this class prepare for and participate in a Model United Nations conference.  The course studies theories and issues of global governance, as well as offering practical training for participation in the conference.  Funding for the conference has been provided by the HSS Dean’s Office.

Students from all majors can enroll in the class but they must be available to attend the conference in NYC April 10-14, 2023. Contact Professor Potter with any questions (potter@tcnj.edu).

All interested students need to complete this survey before being enrolled in POL 370-01.

More than two decades after the terrorist attacks on September 11, 2001, the pursuit of homeland security remains a powerful vehicle through which the federal government has increased its power. Through an interdisciplinary survey of the field we will examine topics including risk management and analysis, threats to the homeland, strategic planning, and the federal role in countering the terrorist threat to name just a few.

Interest groups are essential to American government. Through an assessment of both outsider and insider tactics including lobbying at the state and national level, we will examine the role these groups play in public policy formation in the United States.

POL 498-01: The Politics of Public Education

Education is at the center of some of the most contentious political debates in the United States. Politicians and policymakers – at the federal, state, and local levels – disagree on a wide array of topics: what role should the government play in schooling? How should we organize and fund public education equitably? What role should states have in school curricula, and what topics should be covered? Should schools and teachers be held accountable for student achievement? In this course, we will explore the politics of the K-12 public education system, focusing on key institutions, actors and theories of policy making.

POL 498-02: Social Movements and the Politics of Protest

Often, when we think about politics, formal and regulated institutions and processes such as elections, political parties, and policy-making come to mind. So often, however, the most concentrated pressures for political change come from ordinary people coming together outside of the formal political sphere. In this Political Science Seminar, we therefore focus on social movements and other forms of collective action aimed at achieving or preventing social and political change (often, though not always, through non-institutionalized forms of political action such as protests and demonstrations). We examine theories that explain how social movements arise and succeed (and why they sometimes do not) and apply these theories to cases from the US and countries in various other regions.

Among the primary objectives of this course is to produce a polished research paper that draws from the frameworks we establish in class, but that is largely based on intensive research on a relevant topic of your choosing. Your topic may have anything to do with social movements and/or the politics of protest, and may examine cases both within and outside the United States.

A study of the origins, content, and impact of citizen attitudes on the U.S. political system. Particular attention will be given to the impact of public opinion, along with other factors, on voting and elections.

An examination of the contemporary political, economic, and social structures of Latin American countries through a comparative-historical lens. Emphasis is on transformative shifts from state-led economies to free market (and perhaps back again), from military authoritarian governments to democracies, and from a focus on class identities to a greater role for racial and ethnic identities in politics.

Follows the evolution of ideas of major American political theorists and politicians, concerning the individual, community, and world, to develop a framework for evaluating contemporary political thought and practice.