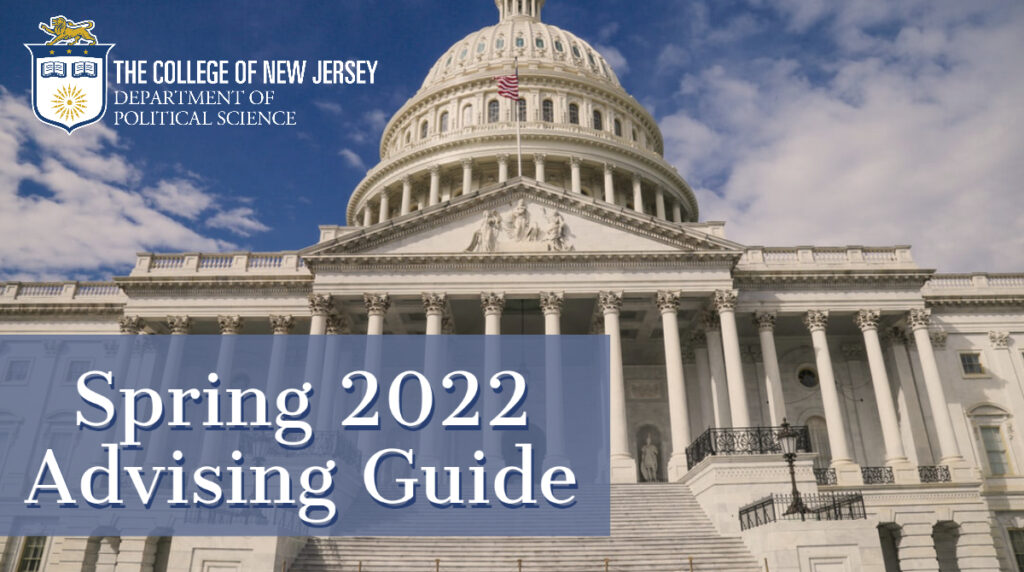 The course list for Spring 2022 is shown below. Classes marked with an asterisk have a topic, which are listed below the course list.

For Spring 2022 courses, the modality (i.e., remote, Flex, or in-person sessions) that currently appears in PAWS may change prior to the start of the semester based on CDC guidelines, State of New Jersey guidelines, and/or local health conditions.

“Politics of the Civil Rights Movement” examines different iterations of civil rights protest in American Politics. Beginning with the Black Freedom Struggle, we will analyze the connective tissue between social movements, exploring how the quest for racial justice has often demanded and inspired activism on other fronts. Students will explore primary texts that speak to the meaning and underlying humanism of resistance politics.

This junior tutorial examines major security issues in the Asia-Pacific region. The course will cover topics such as U.S.-China relations, North Korea’s nuclear program, the South China Sea disputes, and U.S. allies in the region, including South Korea and Japan. By the end of the course, students will develop an independent research paper that employs political science research methods.   .

This tutorial will explore the politics of health and healthcare across the world, examining the ways that both domestic and international institutions, actors, and cultures shape the health policies and outcomes that we see today. Considering health through a human security framework, students will explore how and why healthcare systems differ across countries, the impact of healthcare systems and social determinants of health (SDOH) on health outcomes, and the ways in which these dynamics contribute to or help to prevent pandemics and other global health crises. Employing in-depth analyses of comparative and international relations literature, students will develop an understanding of the politics of health while also learning how to form a research question, summarize relevant literature, design and execute a project using appropriate methods, and assess the contribution of original research.

This seminar will allow students to build on their multidisciplinary coursework in international studies to write a capstone research paper on the ebbs and flows of globalization. Economics globalization refers to the accelerating exchange of goods, capital, people, and ideas across borders. Such flows generate significant social, political, and economic change. The study of countries’ choices in embracing or resisting globalization focus the seminar’s inquiry while allowing each student a broad range of potential research topics.

This course provides an analysis of the institutions, the political processes, and the resultant policies of state and local government in New Jersey. Particular attention is given to the structure of state, county, and local government, related political organizations, the nature of politics in New Jersey, and the impact of the state’s cultural, economic, political, and social characteristics on political decision-making and public policy at the state and local level.

POL 351: Politics of the European Union

This course explores the historical foundations, consequences, and scope of European political and economic integration since 1948. We will examine the historical trajectory that the European Union has followed over the past 70 years, how national political considerations have shaped the direction and pace of European integration, the variety of policies that the EU implements, and some of the ways that the EU has impacted the policies and economies of its member states. We will also consider the challenges faced by the European Union: the dilemmas generated by the single currency, the ongoing refugee crisis, and the potential fragmentation of the Union.