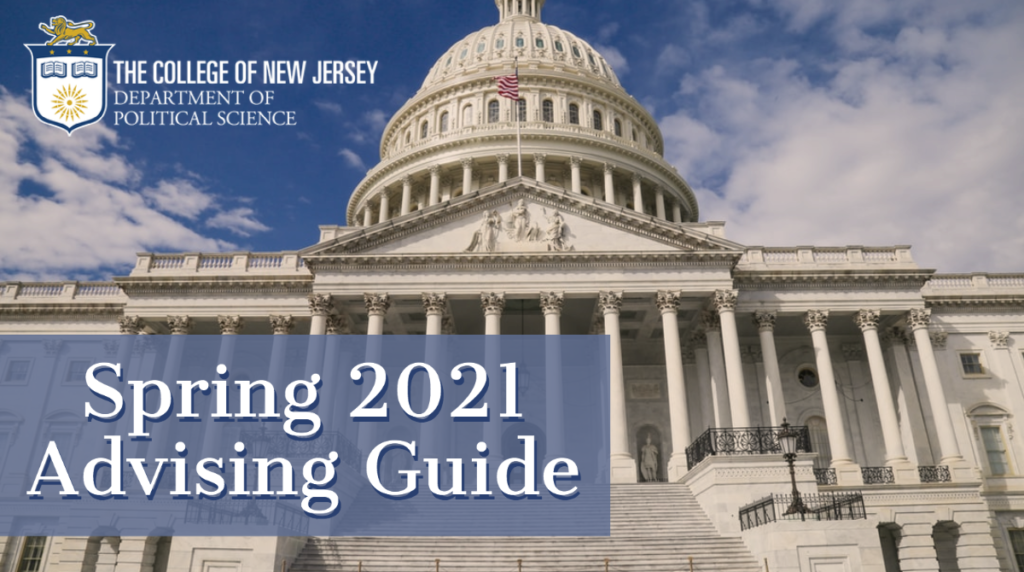 The course list for Spring 2021 is shown below. While the list of courses is mostly self-explanatory, a couple of items are noteworthy. First, pay attention to the subfield of the course as you create your schedule. All political science majors must take a course in each subfield during their college career. Second, classes marked with an asterisk have a topic, which are listed below the course list.

For Spring 2021 courses, the modality (i.e., remote, Flex, or in-person sessions) that currently appears in PAWS may change prior to the start of the semester based on CDC guidelines, State of New Jersey guidelines, and/or local health conditions.

Students in this seminar will study how economic and political systems are linked in the United States, with particular attention paid to how organized interests pursue their goals across the American federal system. American political economy broadly refers to the process by which public officials, businesses, lobbyists and citizens determine who gets what, when, how and where in the United States. We will pay particular attention to Congress and the state governments to observe how “rules of the game” affect policy outcomes that vary in substantial ways on socioeconomic, racial and regional lines.  Students will gain a greater understanding of quantitative research methods and produce group and independent research.

The tutorial provides an in-depth study of the politics of oil within the fields of both comparative politics and international relations. In class meetings, we will first briefly explore the history of the oil industry since the early twentieth century, before addressing some of the key analytical issues in both the political economy of development literature and International Relations/Security Studies as they pertain to hydrocarbons (oil and natural gas). The Tutorial combines in-depth examination of a host of topics through assigned scholarly material and class discussion with independent research on a topic of students’ choice that will culminate in an oral presentation and final paper. Within comparative politics, students may explore such topics as the relationship between oil and instability in Venezuela today, between oil and poverty in West Africa, or between the state and the national oil company in Mexico. Within international relations, students may study, for example, superpower intervention in inter-state conflicts in oil-rich zones or the oil-dimension of the relationship between the United States and Saudi Arabia.

(Enrollment requires the permission of instructor)

This Political Science small group research course is less like a traditional course and more like a research team or lab, in which six exceptional students work on the active scholarship of the professor. Students will engage with recent scholarship on areas related to the project and will collect and analyze data that helps update the project’s empirical findings. At the end of the course, students will have in-depth experiential knowledge of what the qualitative social science research process looks like when the outcome is scholarly work meant for publication.

This course will provide students with an overview of the prominent theories of social movements and popular protest. These theories are designed to answer a series of questions about social movements: where they come from, how and why they last, how and why they end, under what circumstances they have an impact on politics and policy, and how they respond to efforts to repress them. Students will write capstone papers that either conduct case study analysis of particular protests or social movements, or large-N analyses of protest data.

POL 311: The Presidency and Congress

Problems of the modern American presidency and of the U.S. Congress, with an emphasis upon interrelationships and consequences for the national policy-making process.

An analysis of how the U.S. Supreme Court interprets the Constitution, focusing on the issues of how much power the U.S. Congress, president and courts should have and how the U.S. government should interrelate with the state governments.

This course provides an analysis of the institutions, the political processes, and the resultant policies of state and local government in New Jersey. Particular attention is given to the structure of state, county, and local government, related political organizations, the nature of politics in New Jersey, and the impact of the state’s cultural, economic, political, and social characteristics on political decision-making and public policy at the state and local level.

An examination of the contemporary political, economic, and social structures of Latin American countries through a comparative-historical lens. Emphasis is on transformative shifts from state- led economies to free market (and perhaps back again), from military authoritarian governments to democracies, and from a focus on class identities to a greater role for racial and ethnic identities in politics.

POL 361: The Middle East through Literature and Film

In this seminar, students are exposed to Middle Eastern society and politics through cultural production — literature (in translation) and film — from the region, supplemented by social scientific writings. Organized around several topical themes, the course addresses Middle Eastern perspectives on critical issues that impact their lives – such as authoritarian governance, gender relations, conflict and war – and as they are treated in literary, mediatic and academic works. The aim is to enrich students’ knowledge and sensitivity while developing a critical lens regarding how we understand other cultures and societies.