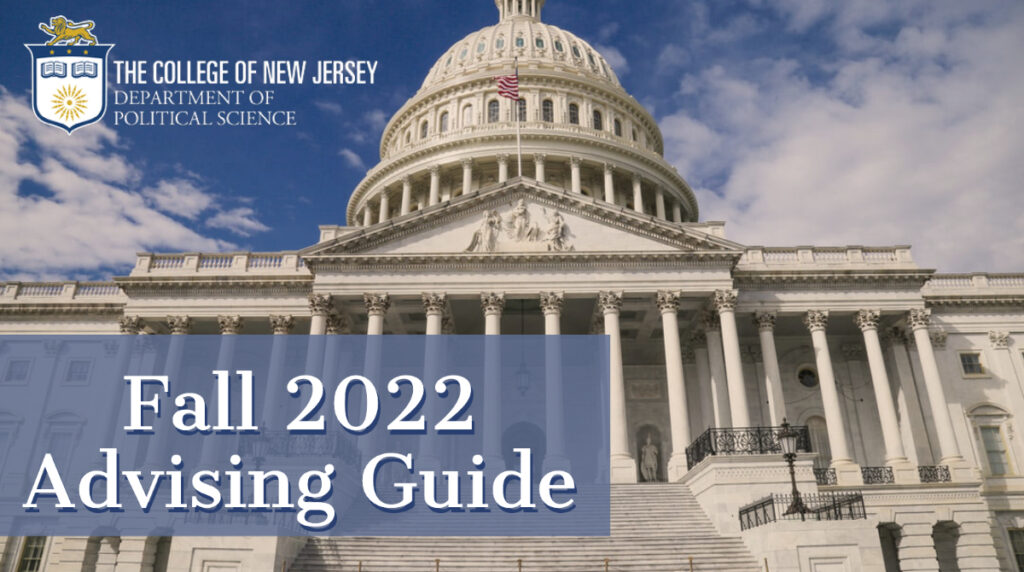 The course list for Fall 2022 is shown below. Classes marked with an asterisk have a topic, which are listed below the course list.

For Fall 2022 courses, the modality (i.e., remote, Flex, or in-person sessions) that currently appears in PAWS may change prior to the start of the semester based on CDC guidelines, State of New Jersey guidelines, and/or local health conditions.

Race and American Democracy examines African Americans’ enduring struggle for racial equality. From the movement to end slavery through today’s Black Lives Matter movement, the thought and activism of African Americans has challenged the dominant norms and institutions of political life. By engaging primary texts and documentary films, this course considers the resources Black politics offers for reimagining American democracy.

The American states have great constitutional authority in our federal system to shape public policy and remain the primary providers of public services in the United States. Since policies are often first experimented on in the states before being enacted at the federal level, as evidenced by the major changes in welfare, education, and health care policies in the last 20 years, the states are often referred to as “laboratories of democracy.” The states are regularly on the front lines of public policy battles, whether it be the term limit movement that swept the western states in the 1990s, anti-abortion legislation, or the expansion of gay marriage rights prior to Obergefell. The diversity in state populations, institutions, and cultures allow the states to pursue different policy agendas long before the federal government can act on an issue. This tutorial will focus on how differences in the political, economic, and social context of the states influence political outputs like public policy, turnout, campaigns and elections, representation, and governance. As a junior tutorial, students will undertake a large independent research project on some aspect of American state politics, and we will devote a significant portion of class time to the art and science of conducting political research.

This tutorial provides a theoretical, historical, and comparative treatment of political violence within states. We study two types of internal wars: 1) those that are instigated by foreign intervention – such as that in the Ukraine (winter/spring 2022) and in Iraq (2003-07) and, 2) those referred to as “civil wars” in which parties are organized groups within the state, such as in Bosnia (1992-5), El Salvador (1979-92), Syria (2011-present). We explore the causes and objectives of these types of organized political violence, the forms they take, and their various dynamics. Some attention will be given to elucidating the persistence and termination of ‘internal’ wars, as well. We examine and evaluate the rich academic literature on the topic. The tutorial is conducted in seminar format, with a lot of attention to guided discussion and independent research.

This Senior Topics Seminar examines a subfield of International Relations: International Security. It explores topics such as the causes of war and peace, the “rise” of China, terrorism, covert conflict, nuclear security, and coercive diplomacy and crisis bargaining. With close consultations with the instructor, students will develop an independent research paper on a topic of their choosing. This capstone project requires students to employ political science research methods, including qualitative methods such as case studies. This course will not teach students statistical analyses (e.g. statistical regressions), but students who are familiar with quantitative methods should feel free to employ them in their research. At the end of the course, students will present their project to the class. Developing an independent and rigorous research paper will take significant work, and consequently, this course has required readings only for the first few weeks. The remainder of the course is independent research that is guided by the instructor.

Living in the U.S., it is clear that race matters. In this course, we will explore the different ways in which racial and ethnic identities have come to matter in polities around the world, and the political consequences of varying sets of race and ethnic relations. Politics is about power, fundamentally. Thus, while we discuss the various ways in which race and ethnicity interact with all kinds of power, and focus on the way that formal politics (i.e., the state, political parties, policies and the like) both shape and are shaped by race and ethnicity.

An examination of the policy-making process, the important domestic policies that have resulted, and the evaluation of these policies. The course covers substantive issues of contemporary public policy in such areas as the environment, health care, welfare, the economy, crime, education, and regulation. The course also trains students in the methods of policy analysis with a focus on designing research projects to estimate the causal effects of public policies.

POL 311: The Presidency and Congress

Problems of the modern American presidency and of the U.S. Congress, with an emphasis upon interrelationships and consequences for the national policy-making process.

An examination of what law is, the sources of law, and the impact of law on society and the individual. Examines internal aspects of the legal system, such as legal reasoning and the structure of the legal profession, as well as external factors such as the economic system and social structure, in order to illustrate the dynamic relationship between law and the society in which it exists.