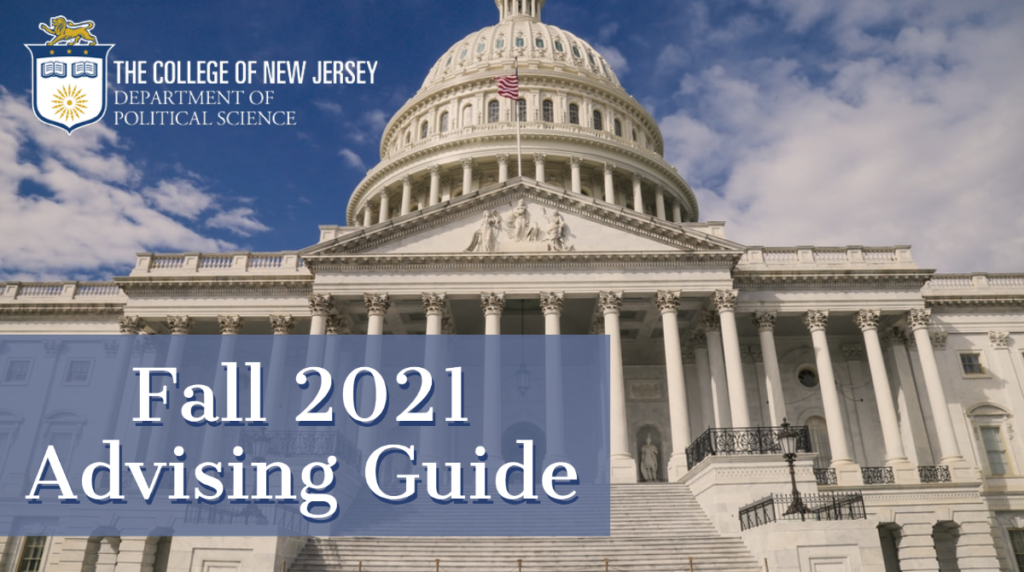 The course list for Summer and Fall 2021 is shown below. While the list of courses is mostly self-explanatory, a couple of items are noteworthy. Pay attention to the subfield of the course as you create your schedule. All political science majors must take a course in each subfield during their college career. Classes marked with an asterisk have a topic, which are listed below the course list.

If the course that you are attempting to enroll in is at its full capacity, you may request to be waitlisted. Please email Susan Scibilia, Program Assistant for Political Science, at scibilis@tcnj.edu to be placed on the wait list.

For Fall 2021 courses, the modality (i.e., remote, Flex, or in-person sessions) that currently appears in PAWS may change prior to the start of the semester based on CDC guidelines, State of New Jersey guidelines, and/or local health conditions.

This course examines the role of the U.S. intelligence community in formulating and implementing national security policies. Students will learn how intelligence collection, analysis, and decision-making take place within the chain of command, involving both military and civilian organs of government, to inform policy in a global security context. This includes aspects of how American leaders approach issues such as homeland security, diplomatic engagement with allies, and covert operations carried out against adversaries.

This course examines the role of the lobbyist and the profession of governmental relations in the shaping of our laws and policies. The course will explore specifically the role of the lobbyist in New Jersey, how that role differs in other states and in Washington. This course is intended to give a broad overview of lobbying, its history, the strategies and tools employed, and how the profession will evolve in the future.  The instructor is an experienced practitioner who has worked in corporate, non-profit, and governmental settings and specializes in the creation of effective lobbying, communications, and government relations strategies.

This tutorial examines the major challenges to security in the Asia-Pacific region. These include U.S.-China relations, North Korea’s nuclear program, the South China Sea disputes, and U.S. alliance relations with South Korea and Japan. By the end of the course, students will develop an independent research paper that employs political science research methods.

This Senior research seminar covers political communication. The course will address how the media institutions affect citizen and legislative political behavior in the modern United States and Western Europe. We consider questions about how the evolution of communication technologies, social networks and the journalism industry affect politics. Students will propose and conduct a rigorous independent research project. As a 400-level course, this is a writing-intensive course with a strong oral presentation component.