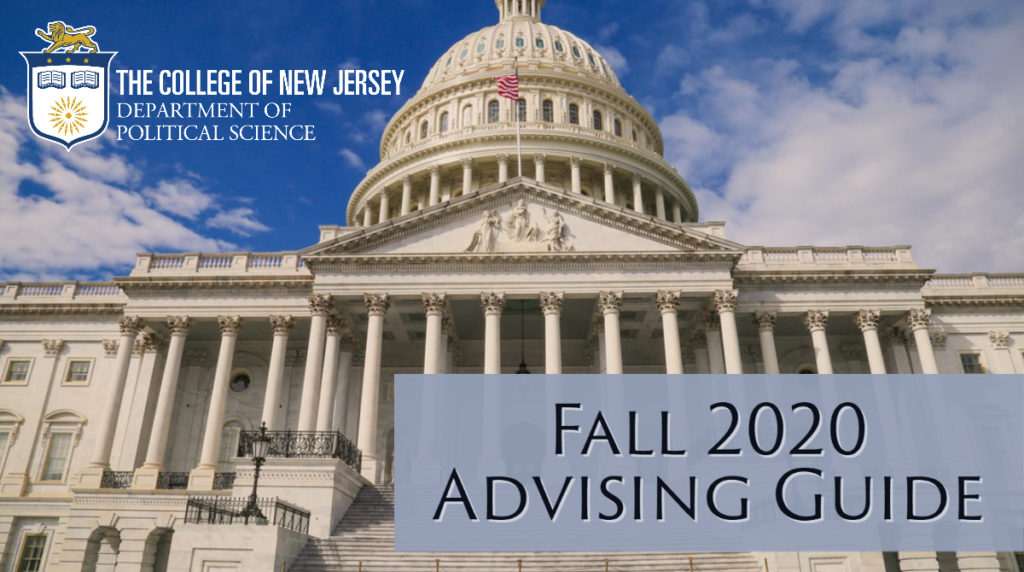 The course list for Fall 2020 is shown below. While the list of courses is mostly self-explanatory, a couple of items are noteworthy. First, pay attention to the subfield of the course as you create your schedule. All political science majors must take a course in each subfield during their college career. Second, classes marked with an asterisk have a topic, which are listed below the course list.

Environmental problems are not new but seem to be taking greater importance in people’s lives. To a large degree, society’s ability to address such issues depends on the policy choices chosen by different governing institutions. What environmental issues demand government attention, how do governments and bureaucracies approach them, and with what degree of success? The course consists of four sections: tools of environmental analysis (such as cost-benefit analysis, environmental impact reports, regulation, subsidies/taxation, and property rights); the dynamics of environmental policymaking in the United States; some comparisons to other countries; and global environmental policies. With a focus on environmental issues, the course offers analytical tools and case studies to understand the making of public policy.

This tutorial prepares students to conduct independent research related to the study of law and courts with an emphasis on judicial selection and decision-making.  Judicial politics scholars examine how judicial institutions and external pressures and constraints impact judges’ behaviors and legal outcomes.  Students will become familiar with existing judicial politics scholarship related to various levels of courts and social science research design and techniques.  At the end of the course, students should be able to select a research topic, survey and summarize existing literature related to the research question, model and define their own contribution to the field, use appropriate empirical methods, and evaluate the contribution of their original research.

This course examines the origins and outcomes of policies that affect marginalized populations. While so often political actors and observers discuss political, social and economic vulnerability, much less frequently do we witness the passage and implementation of policies that aim to ameliorate so called social exclusion. This course examines why such rare policies get passed when they do, why they are sometimes successfully carried out (while other times fail to be implemented), and the variety of outcomes that arise out of their passage.

(Enrollment requires the permission of instructor)

This Political Science small group research course is less like a traditional course and more like a research team or lab, in which six exceptional students work on the active scholarship of the professor. Students will engage with recent scholarship on areas related to the project and will collect and analyze data that helps update the project’s empirical findings. At the end of the course, students will have in-depth experiential knowledge of what the qualitative social science research process looks like when the outcome is scholarly work meant for publication.

This Senior Topics Seminar covers political communication. The course will address how media institutions affect citizen and legislative political behavior in the modern United States and Western Europe. Students will propose and conduct a rigorous independent research project. As a 400-level course, this is a writing-intensive course with a strong oral presentation component.

An examination of the policy-making process, the important domestic policies that have resulted, and the evaluation of these policies. The course covers substantive issues of contemporary public policy in such areas as the environment, health care, welfare, the economy, crime, education, and regulation. The course also trains students in the methods of policy analysis with a focus on designing research projects to estimate the causal effects of public policies

An examination of what law is, the sources of law, and the impact of law on society and the individual.  Examines internal aspects of the legal system, such as legal reasoning and the structure of the legal profession, as well as external factors such as the economic system and social structure, in order to illustrate the dynamic relationship between law and the society in which it exists.

POL 351: Politics of the European Union

This course explores the historical foundations, consequences, and scope of European political and economic integration since 1948. We will examine the historical trajectory that the European Union has followed over the past 70 years, how national political considerations have shaped the direction and pace of European integration, the variety of policies that the EU implements, and some of the ways that the EU has impacted the policies and economies of its member states. We will also consider the challenges faced by the European Union: the dilemmas generated by the single currency, the ongoing refugee crisis, and the potential fragmentation of the Union.

An examination of the politics of Middle Eastern and North African states from a comparative historical perspective.  The principal focus is on the challenges and constraints that Middle Eastern societies have faced in their efforts to create modern nation-states.  Topics include imperialist intervention in the region, post-Colonial state-building experiences, and the role of Islam in domestic politics.